His Words: Judges 16:15-17 And (Delilah) said to him, “How can you say, ‘I love you,’ when your heart is not with me? You have mocked me these three times, and you have not told me where your great strength lies.” And when she pressed him hard with her words day after day, and urged him, his soul was vexed to death. And (Samson) told her all his heart, and said to her, “A razor has never come upon my head, for I have been a Nazirite to God from my mother’s womb. If my head is shaved, then my strength will leave me, and I shall become weak and be like any other man.” 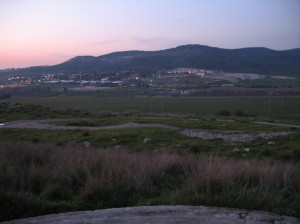 View of the valley where Samson grew up from Beth Shemesh

my words:  Context – Delilah has already asked Samson the source of his strength three times, he has lied to her, and she has immediately tried to use his words against him and remove his strength.  If he could think clearly in the face of temptation, Samson could see that Delilah is trying to destroy him.  Yet, he gives in and tells her the real source of his strength.

Apply: It is extremely difficult to think clearly in the face of temptation.  I see three things that would have helped Samson and should help us.

What has helped you in your battles against sin?